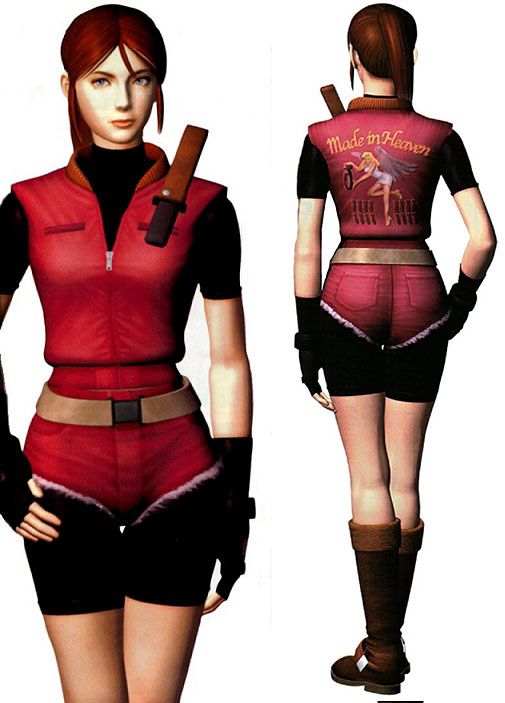 As the basis I used pattern 116 for jacket and trouser from Czech edition of Burda magazine no.2 year 1991 which I modified. I joined two parts of the pattern together to create one whole back piece and one whole front piece. “It is soooo easy to make a vest, isn’t it? Especially when you have a pattern of correct size!” …Yes, sure… After I copied the pattern onto the fabric, pinkish red denim, and cut it out, I pinned it together to make a simple vest which I tried on and… I started to cut, adjust and try on over and over again. That’s what you will do when you don’t make mock-ups.

The vest had to be shorter than the original one for which pattern was, so I went with the shorter length from the beginning (later, after first event in the costume I decided to shorten it even more). Shoulders of original pattern also didn’t fit me, so I had to adjust the armholes and, as usual, because I have “some” boobs, I had to add some darts (Claire’s model doesn’t have them – almost every game model doesn’t – they don’t think about things like that at all when making models – but to achieve the correct look I had to add them and luckily they are almost invisible on photos). I sew the vest together and tried it on once more – this time to see how big the false pockets should be and where exactly I should put them. Yaaaay for the inventor of paper tape! Thanks to it I don’t have scratches from pins all over my boobs.

At the bottom part of the vest I made a small tunnel into which I inserted the elastic. The elastic was about one third shorter then the length of my waist – this way I achieved the desired ruffled waist. Then I “only” had to sew on the knitted band as the collar and sew on the zipper. And of course finish up everything to look neat.

The final step, of which I was afraid of the most, was the painting of the picture on the back of the vest. Painting/drawing – my nightmare. I printed out the picture and the inscription, I cut it out and drew it onto the fabric. My hands were shaking all the time… I was so afraid of messing it up! I used Pébéo Setacolor Opaque which I’ve used before and which worked well for me. I ironed up the paints, I ironed down the darts, pockets, seams etc. and I was really pleased with how it all turned out. I was soooo happy thatI was going to cosplay Claire – finally.